Does Spring cause Legionella to spring into action?

Legionella can be a risk in all seasons but it is widely known that warmer seasons create the ideal environment for the growth and virulence of the bacteria. Spring is a season that could kick this deadly bacteria into increased action - with the warmer temperatures, humidity and increased rainfall, all of which increase the risk of Legionnaires’ disease.

In 2010, increased temperature and intense rainfall triggered a record number of cases of Legionnaires' disease in The Netherlands1. The investigation suggested the warm weather amplified Legionella growth and then spread during a period of wet weather1.  Similarly in 2003, in the Mid-Atlantic region of the US, a study also linked the increased number of cases with the combination of increased rainfall and warmer air temperature2.

So why does it rain more in Spring?

As the saying goes...“April showers bring May flowers” - especially true for the Northern Hemisphere, with each year the onset of spring typically triggering downpours.

Spring, however, doesn’t occur at the same time across the globe. In the Northern Hemisphere, spring covers March 1 to May 31. The Southern Hemisphere, is the opposite, with spring falling between Sept 1 to Nov 30.

Generally, the Northern Hemisphere receives more rainfall than its southern cousin. So, what causes spring-time showers in countries north of the equator?

Elements like latitude, elevation, prevailing winds and land formation can influence precipitation. This environmental cocktail positions the Northern Hemisphere perfectly for increased rain during the springtime.

The theory behind this is fairly simple. Clouds form from evaporated water vapour from the Earth’s surface and during the transition to warmer temperatures from the cooler months, the air heats up. The outgoing cooler, drier winter air collides with the approaching warmer, more humid summer air. This blend of temperatures causes this air to rise, releasing the moisture as rain.

A wet spring in the Northern Hemisphere can be attributed to ideal temperature conditions, proximity to mountain ranges and the prevailing winds.

In the Southern Hemisphere, rain can still happen during springtime and this time of year can bring major thunderstorms and tornados for some3.

How is this relevant for the increased risk of Legionella infection?

As explained, with the right combination of environmental factors the foundation is laid for Legionella to take a stronghold. In a CDC journal, a study identified that moving vehicles can splash water from rain puddles into the air 4.

Once in the air, this potentially deadly pathogen can be breathed in as aerosols by passers-by and the article also states airborne L. pneumophila can survive longer at high relative humidity4. Again, highlighting the relevance to increased humidity during spring.

It concludes, that the frequent presence of L. pneumophila in rainwater puddles on asphalt roads, indicates there is a possibility of contact with L. pneumophila–containing aerosols.  To reduce illness and death from Legionellosis, doctors should consider, when treating pneumonia patients who have not frequented the usual suspect locations such as hotels and spas during springtime, the possibility of Legionnaires' disease4.

We can't control the incidence of rain, the formation of puddles or stop vehicles propelling rainwater into the air, but adding a review of this natural occurrence as part of a risk assessment could be a good idea.  Steps could be taken to protect the public:

It's not all about rain, warmer temperatures increase the risk too.

Spring's increasing temperature can increase the risk of contracting Legionellosis or Legionnaires’ disease. Also as the warmth is felt outside and building internal heat increases as a result, there may be extra demand for more cooling solutions.

It could be that many systems will not have been in full operation during the preceding cooler months. Spring is a time for many cooling systems to restart. This season creates an unpredictable weather pattern. Some days are warmer, some are cooler and therefore the demand for cooling will also be intermittent. This can increase the risk of Legionella growth, especially when comparing it with the summer season when cooling systems are in full and constant operation.

Air conditioning systems and humidifiers create and disperse a fine mist of water into the air. if this water is contaminated with Legionella, is it now airborne and ready and waiting to be inhaled into the lungs.  These systems can be perfect delivery mechanisms for this deadly bacteria5. Servicing and regular cleaning of air conditioning units and humidifiers are essential.

High-risk industries, such as cooling towers and hospitals, should be subjected to more frequent testing over spring and summer.

Our tests for water and biofilm are a great tool to mitigate seasonal Legionella risks. They provide immediate results with little to no training. 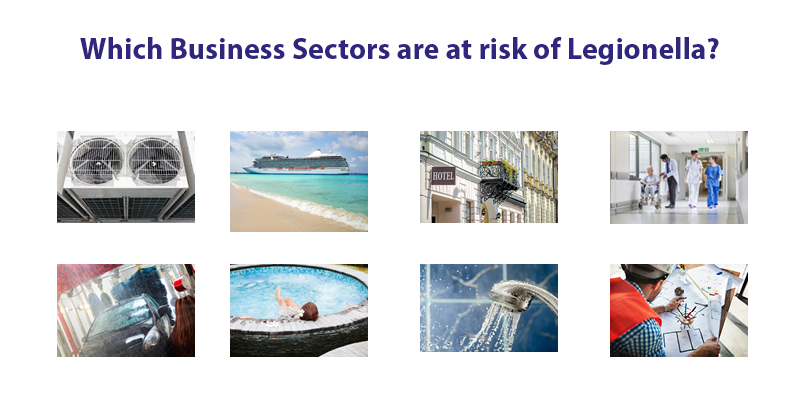