The Cost of Legionnaires' Disease

Legionnaires’ disease and Legionellosis has a significant financial impact on public health and productivity. Cases of Legionnaires’ have been on the rise across in the UK, the EU and the United States for years.

Official statistics, concerning as they are, largely underestimate the real number of cases and the actual growth in cases. The ELDSNet suggests that cases in the EU could be as high as 50,500 cases a year, or about 100 per million of the population.

In the USA the CDC has estimated that the real number of Legionnaires’ disease cases could be as high as 18,000 cases per year. The National Academies of Sciences, Engineering and Medicine (NASEM) have stated that cases are higher still, estimating up to 70,000 cases per year.

How much is this crisis costing us?
The widespread increase in cases of Legionnaires’ disease has devastating consequences for human life. Around 10% of all people who contract the infection will die and the mortality rate is significantly higher in healthcare facilities or care homes.

Experts in the field have estimated that the cost of Legionnaires’ disease for health care and productivity losses in the UK is around £100 million a year.

The Edinburgh Outbreak
In 2012, an outbreak caused by Legionella pneumophila serogroup 1 (the most dangerous form of Legionella bacteria) infected 101 people and killed 3 in Edinburgh, UK.

A study estimated the immediate cost of the outbreak to the national health service.

Since no long-term data was available, the cost of long-term health impacts such as persistent neurological and physical impacts, disability, and PTSD is unknown.

When care for those who were not hospitalised and the cost of drugs and diagnostic testing were factored in, the direct cost was estimated at around £1million.

The same study tried to estimate the cost the Edinburgh outbreak had on the economy. They did this assuming half of the survivors were fully employed and had to take 3 months off work on average.

They estimated productivity costs at around £900,000.

Overall, the estimated cost of the Edinburgh outbreak was £1.8million, excluding mortalities.

The same paper concluded that the economic burden of Legionnaires’ disease more than doubled when loss of productivity and medical care was factored in. 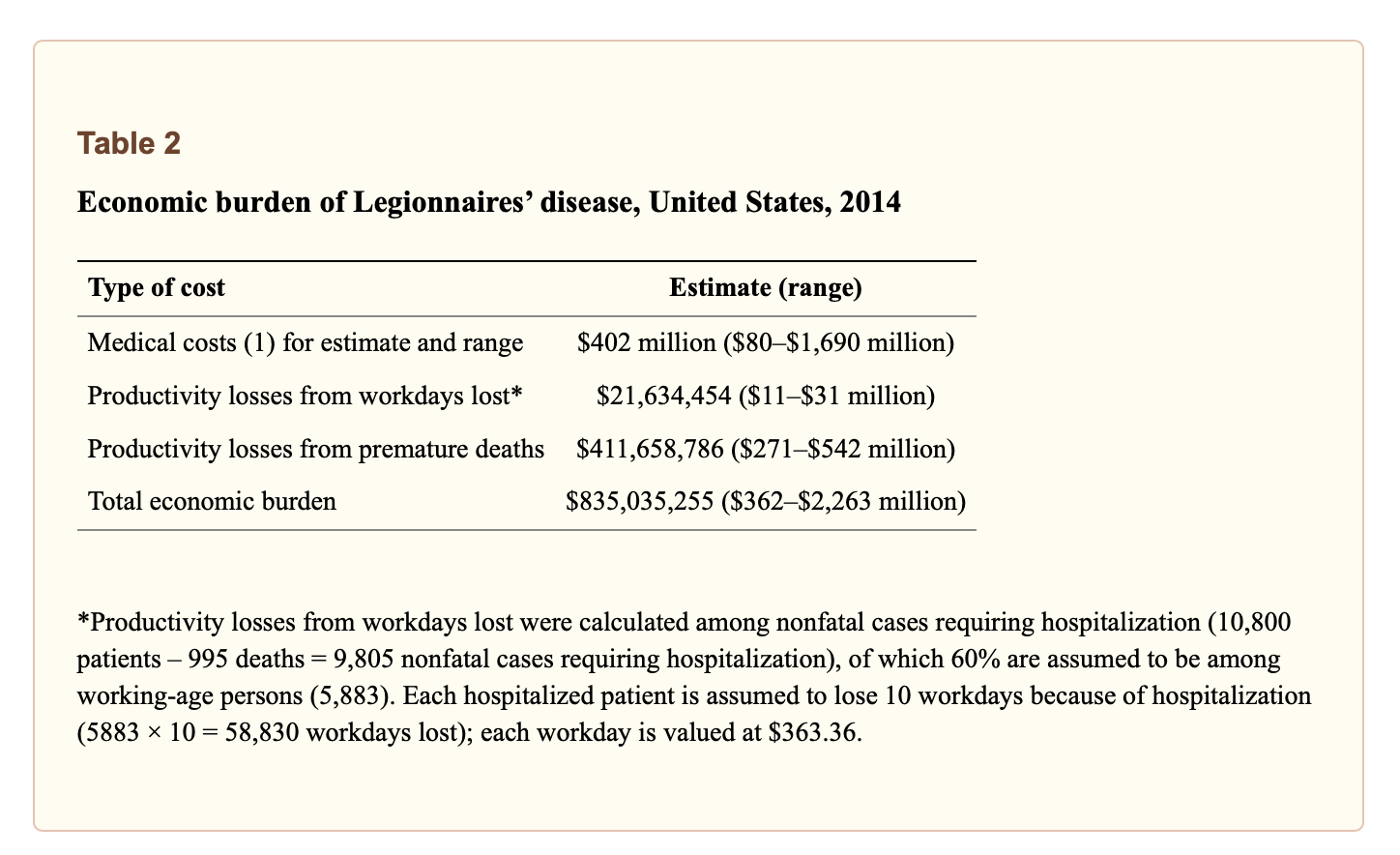 This research provides further support for investments into the prevention of Legionnaires’ disease and shows that more legislation is desperately needed in the United States and European countries where legislation is either non-existent or fragmented.

Scientists predict that cases of Legionnaires’ disease will continue to rise along with global heating and ageing populations. Failure to implement preventative measures could put hundreds of thousands of lives at risk and could lead to a staggering financial burden on our health care and economies.